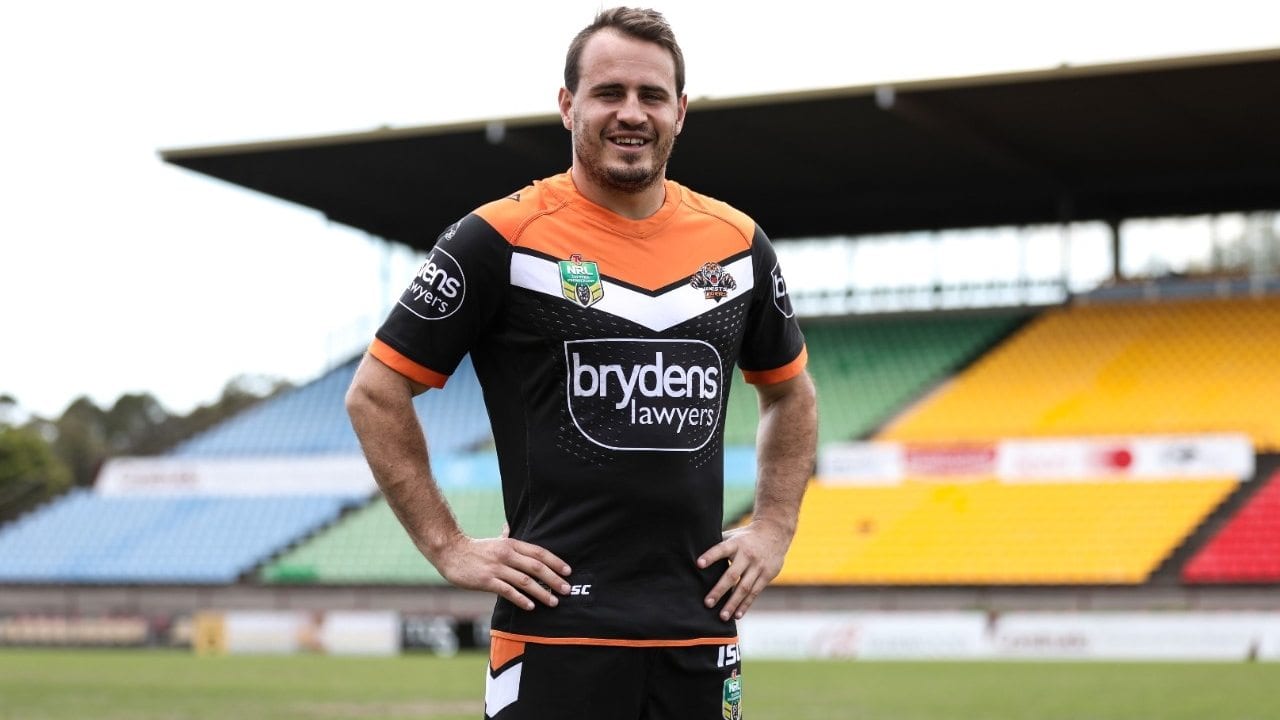 Embracing a new chapter in his illustrious career, Reynolds anxiously drove towards Concord to begin his journey with the Wests Tigers.

Early in the morning, Reynolds couldn't help but to reflect on the highlights of his career, vowing to bring the 'family values' that he installed at the Bulldogs, to the Tigers.

Reynolds began training and admitted that it felt a little 'weird'. It wasn't long until the five-eight felt a sense of belonging.

Well-known for bringing his teammates together, so much that James Graham offered to sacrifice his significant pay-rise, for the Bulldogs to retain the former NSW halve.

"When I got my first bit of gear it was a little bit weird, it wasn't blue and white," Reynolds said in his first interview in Tigers colours.

"I don't go home and say, 'I can't believe I'm in this'. I'm going to take it with both hands. I know I grew up in Belmore, but I want to create the same concept here. I'm doing what I love, which is playing rugby league – it's just for a different club. It doesn't mean I'm going to be any less passionate about who I play for. My whole family used to go for them growing up. There are ties there.
"The club is on the up with the type of players they've bought and bringing Ivan [Cleary] in will change the club. The fans of the Wests Tigers haven't – this is no disrespect to the players that have played – but they haven't seen semi-finals in a while. It would be nothing better than to come here with a few new boys and try and do that and try and create a great culture."

"Ivan said to me: ‘the superstar of our team is the team’. I can’t tell you how good that made me feel..." - Josh Reynolds

Tigers faithful are nervously waiting to see the Reynolds-Brooks combination in the opening round of the season, against the Sydney Roosters. However, the 28-year old is looking further ahead.

"I'd be lying if I said I wasn't having a little think about that game," he said of the round 12 clash with former club Canterbury.

"The old cliche is I take it like any other game, but it's definitely going to be weird coming up against them because I've played with a lot of them for a good five or six years.

"It's going to be interesting and fun. Before will the hardest bit, but when it kicks off it will be just another game. They will probably get into me. [Laughing] I don't get into people on the field, so I'll just take it on the chin and walk off. While it's going to be hard, I'll make sure it's fun because in 20 years, when we have a beer down the track, we'll have a laugh about how I did something crazy or outrageous in the game."

Reynolds discussed his ambition to lead the young Wests Tigers players into a new era, and to create a legacy of their own.

"I feel here at the Tigers, the team comes first," he said.

"No one is better than anyone, it doesn't matter if you've played 30 Origins or you're debuting. I think that's a great culture and message to get across to the boys. Everyone takes that on board. Everyone takes leadership and ownership, that's the best way to be.

"For me at the Bulldogs, I felt I was a bit the same. There were so many good players around me, I just had to do my job. I wanted to step out of my comfort zone. Maybe it's because I'm getting on in footy, I'm 28 years old, and I definitely want to become an influence in the team, a bit of a leader."

The man named 'grub' acknowledges that he most certainly isn't the most silkiest player, rather he's more well-renowned for his energy and passion. Shocked at Graham's selfless gesture, Reynolds believes that it's the most humbling thing anyone's done for him.

"Away from the game, that's the most humbling thing, the most amazing thing that anyone has ever done," Reynolds said of Graham.

"I never knew about it, that was the best thing. Even when we had a couple of beers lately, he didn't mention it. It's something he wanted to do. It's weird, from the outside looking in at a lot of clubs, a lot of players look at it as just a job. That's fine, that's the way they do it. But for me it's about creating friendships because when footy is done you don't come to training every day. So you don't see those mates every day. It's about creating [lasting] friendships.

"That's what I was like at the Dogs. It didn't mind to me if I had to see the boys out west or go out to Cronulla, it's what I like doing. I've always been like that, I like being around good people and creating friendships. I want to do that at the Tigers. They have accepted me so well. Honestly, it feels like I've been here for a couple of years already in two days. Not the footy stuff, just being able to muck around with a few of the boys."

While it isn't all new for Reynolds, his family previously supported the Tigers before switching alligences to the Bulldogs.

"My grandparents lived in Annandale," he said.

"My mum grew up there before they moved to Belmore. My cousins were all Tigers fans before I started playing for the Dogs. So now they have to dust off their old jerseys and get them out at Leichhardt Oval."