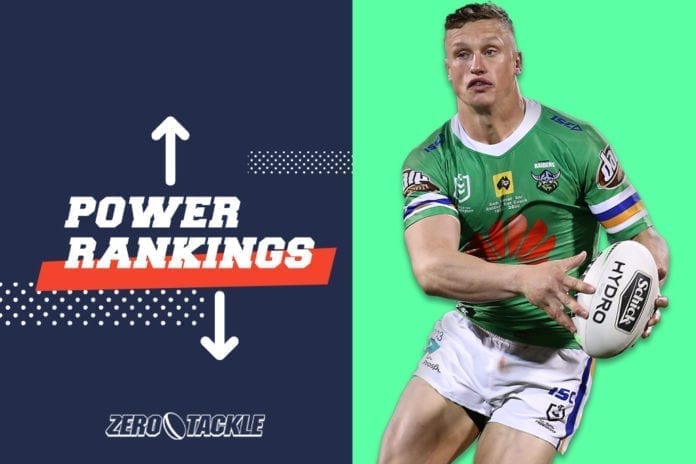 Despite incredible performances over the weekend by the Bunnies and Raiders, the Panthers still sit as well deserved title favourites. The week off at this time of the year is absolutely invaluable. Don’t pay too much attention those any suggestions that you “don’t want the week off” come finals time. In the past four Grand Finals, only once has a team with the week off failed to make the Decider.

Again, despite all the talk of Walker and Wighton being the form players, Nathan Cleary has lead the way all season and is a short priced Dally M favourite. Don’t let the week off let you forgot that the Panthers haven’t lost a game since the 12th of June.

The Panthers are in red hot form, are well rested and are dripping confidence. As Minor Premiers they deserve the tag of being the team to beat. The only thing that can beat the Panthers from here are the Panthers themselves. This is a club who hasn’t enjoyed regular Prelim finals like say oh … their opponents this weekend.

The Storm earned the right to sit with their feet up as the Raiders disposed of the back to back Premiers. The week enabled superstar Cam Munster to rest up, and allowed Craig Bellamy to continue to build his super successful “us vs them” mentality the Storm seem to develop this time every season.

If Melbourne are going to make send out their superstar number nine in supreme fashion, they’re going to have to do it against the red hot Raiders on a neutral home ground. This is why I have them ranked below the Panthers here. If there’s to be an upset in the Prelims, it will come in this game.

‘That said, we’re talking a side lead by Craig Bellamy, Cam Smith, and Cam Munster. They’ve made Queensland a home away from home and will enjoy a big home crowd this Friday night. All signs point to yet another Grand Final appearance for the machine that is the Melbourne Storm. Try telling Canberra that though.

For mine the Raiders just pip the red hot Bunnies and look the team most likely of a Prelim boilover this weekend. The Green Machine are brimming with confidence after disposing of the Sharks in a canter despite falling behind early, and then knocking the back to back premiers out of the competition across the past fortnight.

Jack Wighton is breathing fire right while the game’s premier front rower is wearing the Raider’s badge on his chest. Josh Papalii is in another world right now and has almost forgotten how to miss a tackle. Throw in Joseph Tapine who is genuinely pushing the top three locks in the game right now, and Canberra are primed to cause an upset.

They’ll head into their Suncorp encounter as the underdogs but I have a feeling that’s exactly the way that Ricky Stuart wants it. His side are in form, almost fully fit (bar their star number nine) and seem to have no issues with self belief. The shock upset may be on here.

The Bunnies absolutely powered into a third straight Prelim with a convincing win over the Eels on Saturday evening. The Burrow almost managed to turn Bankwest into their own home ground such was the noise coming from the red and green. Those same fans are walking into another battle on and off the field this weekend.

Cody Walker is leading the way after a string of incredible performances. Adam Reynolds has a habit of lifting his game at this time of the year. Damien Cook absolutely tore the Eels to shreds when their forwards tired. He’s the key for the underdogs this Saturday evening. If he fires, anything is possible.

Souths will have some memories of the past few seasons after falling at this hurdle, however if anyone can have them ready it’s Wayne Bennett. The Souths forwards will have to lift to match the all star Panthers pack but they have it in them. Probably the least likely of the sides to cause an upset but you’re braver than I am to rule out a Bunnies ambush.

The back to back Premiers exited the competition having lost two straight finals games. Considering they lost Cooper Cronk and Latrell Mitchell yet were still a scoring play within overturning both results, that’s not exactly a horror effort.

You wouldn’t know judging by the Roosters fan reaction after the loss to the Raiders though with fans calling for the jersey of young number seven Kyle Flanagan, and hilariously calling for Manu to shift to fullback next season.

James Tedesco was helpless as the ball bounced away from him in what ended up being the match-deciding try, however up until then he was 9/10 with two tries and 260 metres. A brilliant effort by the tri-colours to defend their title yet again.

The Eels are another side who faltered in the finals however should be very proud of their performance in 2020. A Mitch Moses penalty goal, which would have drawn the home side level ended up being the momentum changer which saw his side exit the competition.

A brave comeback saw the Eels look as though they might overrun the tiring Bunnies, however once the Eels forwards lost momentum they were carved up by Damien Cook and co. From there they had little in terms of answers.

Questions about Moses’s ability to deliver a title will no doubt dominate the off-season talks, however with a young halves partner and number nine by his side, I think questions have to be asked elsewhere. Clint Gutherson was an absolute machine and earned his Origin call up.

Sydney club back in the race for Storm star