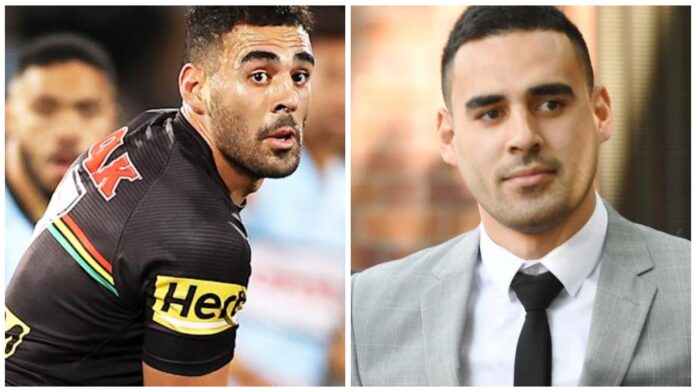 Penrith premiership player Tyrone May has unpopularly dredged up his disreputable deeds following the Panthers' 14-12 win over the Rabbitohs in Sunday's Grand Final.

Despite being stood down for the entirety of the 2019 season following his part in an illegal and graphic sex tape scandal, the 25-year-old felt that the post-whistle celebrations were a perfect opportunity to take aim at the past.

In an Instagram post shared on Sunday night, May uploaded an image of he and head coach Ivan Cleary following a court sentencing that saw the utility hit with a three-year good behaviour bond and a lengthy community service order last year.

Though the presiding judge at Parramatta Local Court labelled the Panthers' actions as 'reprehensible' before finding him guilty of four charges pertaining to the recording of sexual content without consent, May saw fit to play the victim this weekend.

In addition to the image of the premiership pairing were lyrics from popular recording artist 'Drake'.

“And the dirt that they threw on my name/turned to soil and I grew up out it/time for y’all to figure out what y’all gon’ do about it,” the accompanying caption read.

Akin to the public condemnation May received following the leak of the brazen video that left his victim with reported 'psychological damages', many have since expressed disgust further disgust at the said post and its creator.

It is not yet known whether the one-time Samoan international will face internal or external sanctions for the inciting upload.