South Sydney Rabbitohs fullback Latrell Mitchell has casually entered the debate about suspensions, deterrents and whether punishments should be deferred for finals.

The Rabbitohs custodian used Instagram to comment on a post by the club’s official account that spelled out the judiciary charges facing both Tom Burgess and Taane Milne in the wake of the heated and controversial elimination semi-final against the Sydney Roosters.

While Milne will be free to take on the Cronulla Sharks if he takes the early plea and pays an $1800 fine, Burgess is looking at a minimum two-match ban for his Grade Two high tackle that ruled Roosters fullback James Tedesco out for the rest of the game. Though that number could have increased had he contested the charge at the judiciary, the club have now confirmed he will not.

It was one of two charges for Burgess in the aftermath of the contest, with a Grade One offence also resulting in an $1800 fine.

Mitchell commented on the post initially, claiming that Burgess should only receive a fine as well and jokingly offering to help pay the penalties.

But while that comment was clearly made in jest, Mitchell followed it up with a post to his Instagram stories, asking exactly where the NRL could find some ‘consistent ground’ for the judging of offences and distribution of penalties. 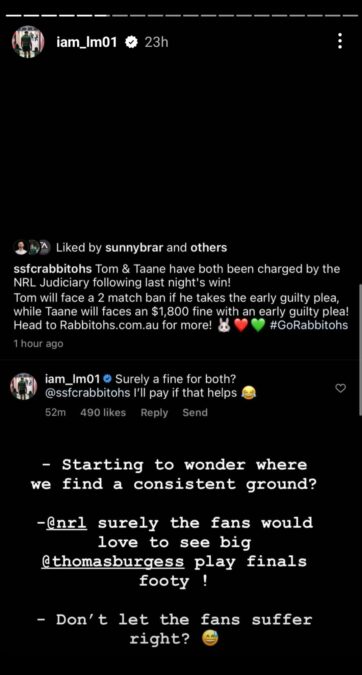 While jocular in nature, the comments are a clear response to the NRL’s recent decision to delay the suspension of Penrith Panthers winger Taylan May to 2023, after he was found guilty of assault, despite no conviction being recorded.

When challenged on the inconsistency created by the delayed suspension at the time, ARLC chair Peter V’landys used the fans as justification, asking why Penrith fans should suffer for May’s actions in a befuddling statement.

“Why penalise Penrith fans for an indiscretion the player did?” V’landys told Channel 9.

“The person that should be paying the penalty is the player, and he will, because he’ll miss two matches and a substantial part of his salary.”