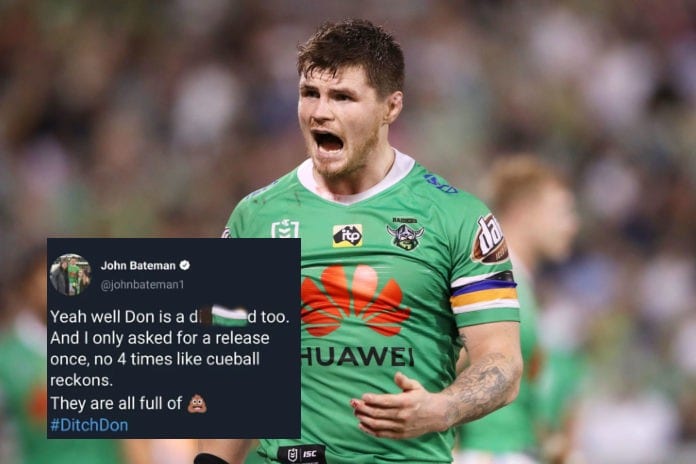 John Bateman has insisted he doesn’t want to leave the Raiders as a “fake tweet” attributed to his account calling out Raiders CEO Don Furner circulates on social media.

Last week, Bateman clapped back at reports his manager had asked for a contract release on four separate occasions, only for Furner himself to come out and confirm the story and that the 26-year-old was free to shop himself around.

In response to this, a “fake tweet” linked to Bateman’s account did the rounds on social media, which read: “Yeah well Don is a di*****d too. And I only asked for a release once, no 4 times like cueball (Hooper) suggested. They are full of (poo emoji). #DitchDon.”

Bateman is chasing a wage increase which will take him to around $800,000 a season.

On Monday, Raiders great Laurie Daley suggested there may be more to the social media storm than meets the eye.

“Now it’s got to the stage where people either are putting out fake tweets and you start to think ‘is there something in this?” Daley said on Big Sports Breakfast.

“Is there a bit of animosity?”

Daley’s co-host, Michael Clarke, added: “I hope his account has been hacked because the timing is not great.”

Bateman has explained his confusion over the fake tweet in The Daily Telegraph, while jumping to clarify his contract situation.

“I swear it wasn’t me. I haven’t got a clue where it came from. Someone has tried to set me up.

“I even Googled ‘how do you make a fake tweet’ when it was brought to my attention to find out how it could happen. I’d never say anything like that about Don. I like him.”

Bateman then praised Furner for his handling of the contract storm and insisted he wants to remain with the Raiders.

“I have a renegotiation clause in my contract at the end of each year,” he said.

“I honestly don’t want to go anywhere but we had a chat.

“Don has been straight up and honest with me. He set the record straight from day one when we started speaking about my contract. He said the club had Origin and international bonuses to pay and upgrades to do. There was Jack Wighton, Tootsy (Jarrod Croker) and Nicky (Cotric) and they needed to get them sorted.

“Don was honest and gave us permission to go and talk elsewhere. He didn’t have to do that. I appreciate it. He said he couldn’t move (on the ­dollars). That’s all I wanted, him being upfront. He’s been straight up with me since day one.”

The TEN best second-rowers in the NRL