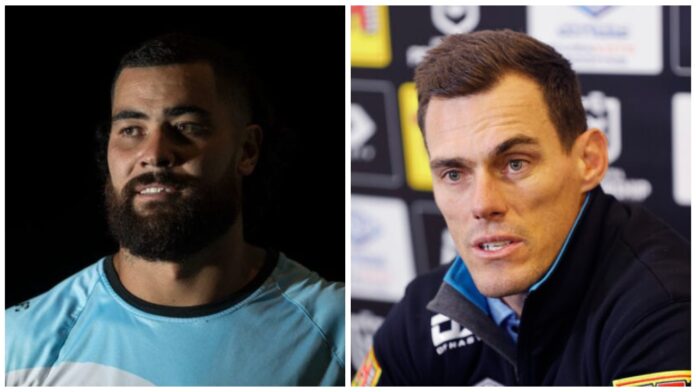 Cronulla veteran Andrew Fifita has revealed that axed Sharks coach John Morris suggested he should retire prior to the opening round of the 2021 season.

Fifita has been named in the Sharks' 17 to face South Sydney in Magic Round on Saturday in what will be his first appearance of the year.

Interim coach Josh Hannay - who replaced Morris at the helm of the Shire last month - selected Fifita for this weekend after the 31-year-old served a suspension sustained in the NSW Cup four weeks ago when playing for Newtown.

Fifita looked to build an impressive pre-season ahead of his 11th year in the NRL, but revealed to The Sydney Morning Herald's Adam Pengilly that Morris told the Tongan international to hang up the boots.

“I got told to retire,” Fifita said.

“I’d done my pre-season and my work. It had been 10 weeks down and I felt like I was ready to go. I thought I went really well in All-Stars and in my second trial for the club.

“And then I got told everything in round one, all the negatives from the whole pre-season. It’s what you get when you hear from the coach once in the whole time I have been there. [It’s a] bit disrespectful on my end.

“In the sport we play, it’s about being transparent and he should have come up to me during the pre-season and let me know my faults and where I could have improved. But to be shown right on round one week ... [it] was pretty hard to work on those things."

Given Fifita's out-of-favour positioning under Morris, questions were raised over his future in the league.

The former Kangaroos representative had been closely linked to a move to English Super League outfit Wakefield Trinity to join his brother, David.

Despite several keen suitors circling Fifita's signature, the former Wests forward remained loyal to the Shire as he has "a point to prove".

“I had a few other offers from clubs, but I can’t play NRL for another club,” Fifita said. “The Sharkies is where my heart is and where it’s always going to be. I’d find it disrespectful to go to another club to be honest.

“To play the rest of the year with my brother would have ticked a box, but it’s not happening at the moment. I have a point to prove. I know the boys are excited to have me back and I can’t wait to get out there on Saturday.

“I have to give thanks to Newtown and they gave me the joy I needed to bring back to my footy. I’m quite excited. I’m waiting to get out there and prove my point.”

The Sharks will be hoping to break their five-game losing streak when they face the Rabbitohs in Magic Round at Suncorp Stadium.

“All but done”: Rabbitohs set to extend star dummy-half

If every NRL club could steal one player: Cronulla Sharks