Vale Paul Green. Do we really need to ask why?

In August of 2014, I was one of many around the world who was simply shocked to learn that one of my childhood idols Robin Williams had taken his own life.

Once all the usual testimonials from fellow celebrities had washed over, the speculative process begun, coupled with the question as to why a seemingly healthy, wealthy, successful and much-loved icon could take his own life.

The process of questioning Williams (and the subsequent pockets of criticism of his 'selfishness') was impertinent enough: it was his life and they were his demons and any attempts to uncover motivations should have been to prevent future suicides, not to sell tabloids.

Over time, it was revealed that Williams was battling health issues, notably Parkinson's Disease, an ailment that would chip away at his very essence bit by bit each day until it killed him. He was also feeling the pressures of a declining relevance in the film and television industry, attaching himself to projects that were critically reviewed as 'lukewarm' and 'exhausted'.

So listening to all of the Australian media outlets discussing the tragic death of Paul Green on Thursday, my cynicism was aroused once more.

It was big news for sure, and the media has a role to report it. But perspectives and exclusive interviews from everyone around him from his high school sweetheart, brother, former mentors, players and celebrities just has a real 'milking' vibe which unsettles me.

On Triple M, one particular commentator was reticent, and instead called upon Beyond Blue and Gotcha4Life to 'help us out' and to tell us what to look for when there is seemingly nothing unusual to question.

Nicho Hynes delivered an impassioned message to Green's family following a Sharks' win and said that R U Okay day should be every day; that we should be checking in on anyone and everyone all the time.

But while we all scratch our heads and wonder why around ten people commit suicide in Australia each day, we get caught up looking for symptoms and ignore contributing factors.

A while back, I wrote about the obscene way in which a sporting news outlet had written a story about the way that the Parramatta Eels, and Mitchell Moses specifically, had 'ruined the life' of a punter who had a multi bet that failed because the Canterbury Bulldogs had sprung an upset.

Moses had to hire private security to protect his family and to escort him to and from training.

The extreme irony of the fact that the writer of that particular article has recently come out and said that we need to do more for player and coach mental health is not lost on punters.

Each week, I watch an NRL panel discussion show that is almost completely mired in speculating about player futures, bagging referees, generating content based on the 'NRL coach merry-go-round' and more.

And while we focus on looking for symptoms of dire mental health, we ignore that the factors that would affect the everyday citizen can also affect those with a public persona.

When celebrities and those in the spotlight feel they cannot go on, it is more often than not because of a feeling of a loss of identity: that they are no longer the person they used to be.

While you and I do not have news articles written about us each day speculating whether or not our bosses will fire us, or heaping pressure on our work performance or on the basketball court, we still feel the intense burning and loss when we do get berated in the office, or when we feel that our sporting performances are getting worse.

How can someone rich and well-known feel poorly enough to end their life? Could it be the the point in which they have been scrutinised and criticised to the point where they no longer identify with the person they used to be?

Robin Williams was adored globally, and renowned for being one of the brightest comedic talents on the screen and stage. When that was taken away from him by harsh critics and a debilitating illness, he felt that he had lost his identity.

Where he had once felt pride, he now felt shame and unsure of how to capture former glory.

It didn't mean he was no longer loved or respected, but there's only so many reviews that one can read that describe him as being yesterday's hero; an exhausted shadow of his former brilliance, before meaning in life is lost.

Paul Green had been absolutely slammed by the columnists after losing his 'dream job' as Queensland State of Origin coach after a series that included a 50-6 shellacking. He had also disclosed to his manager in the days before his death that he felt lost and confused, and desperate to get back into a head coaching role.

He was still celebrated as a highly successful player and coach, basking in the warm adulation at a Cronulla Sharks reunion only a week prior to his death. But in his heart, he knew that he was losing grip on his identity and it was too much to bare.

He likely wondered how many times his ability would be questioned on panel TV shows, and whether he would ever return to his head coach glory days.

So do we continue to push the R U Okay concept, as though it is our responsibility to reach out to people and check in? Because in theory, a person who fights battles privately may continue to battle privately, regardless of check ins.

Do we keep exploring the reasons for suicide after it's happened so that we can prevent it happening in the future, when deep down we know there's little those of us who are left can do at all?

Or do we move away from this ratings and newspaper-selling drive, the push to speculate, subjugate, criticise and pressure those in our game just to get a few more viewers each week?

Those who are most well-known publicly will feel the warmth of support the most, but feel the heat of judgement the harshest.

We need to be nicer to people and hope that through common humanity, those who are struggling will reach out to us and say 'hey, I'm not okay'.

That is our responsibility. Not to ask 'RU Okay', but to hope that others will come to us before their struggles are more than just a headline in the next newspaper.

When the finals are out of reach, what is there left to play for?

Pride? Another contract? The fans? The overall health of the game?

For the Tigers, Titans, Knights, Warriors and Bulldogs, their only goals are likely to be to avoid the dreaded wooden spoon, and to start building towards next season.

When all the focus is on who is going to be the 2022 premiers, the question is why should anyone care what those teams out of contention get up to?

Adding even further weight to the question, out of the 113 teams to win the premiership since 1908, only two teams have won from outside the top four.

So when the competition ends, and the McIntyre system kicks in, the bottom eight teams start organising Mad Monday and preparing for next year.

That means that a huge number of supporters lose a fair chunk of interest in what plays out from there.

But what if there was an incentivised system that meant those bottom eight teams still had something to play for?

If the NRL incorporated a McIntyre system that ran concurrently to the NRL finals, with an incentive to the winner of the bottom eight, what would that mean to (a) the remaining non-relevant games during the regular season; (b) the hopes and aspirations of teams and their fans in leading into the next year?

Whatever the incentive is, surely the game could use the additional revenue of games where fans care about the outcome. $200,000 into a club's coffers (not the salary cap) could have huge benefits.

And for those teams who already know, sometimes months out, that they won't make the eight, surely it can only be a positive to have them striving for 9th place instead of floundering around and hoping to avoid the spoon. 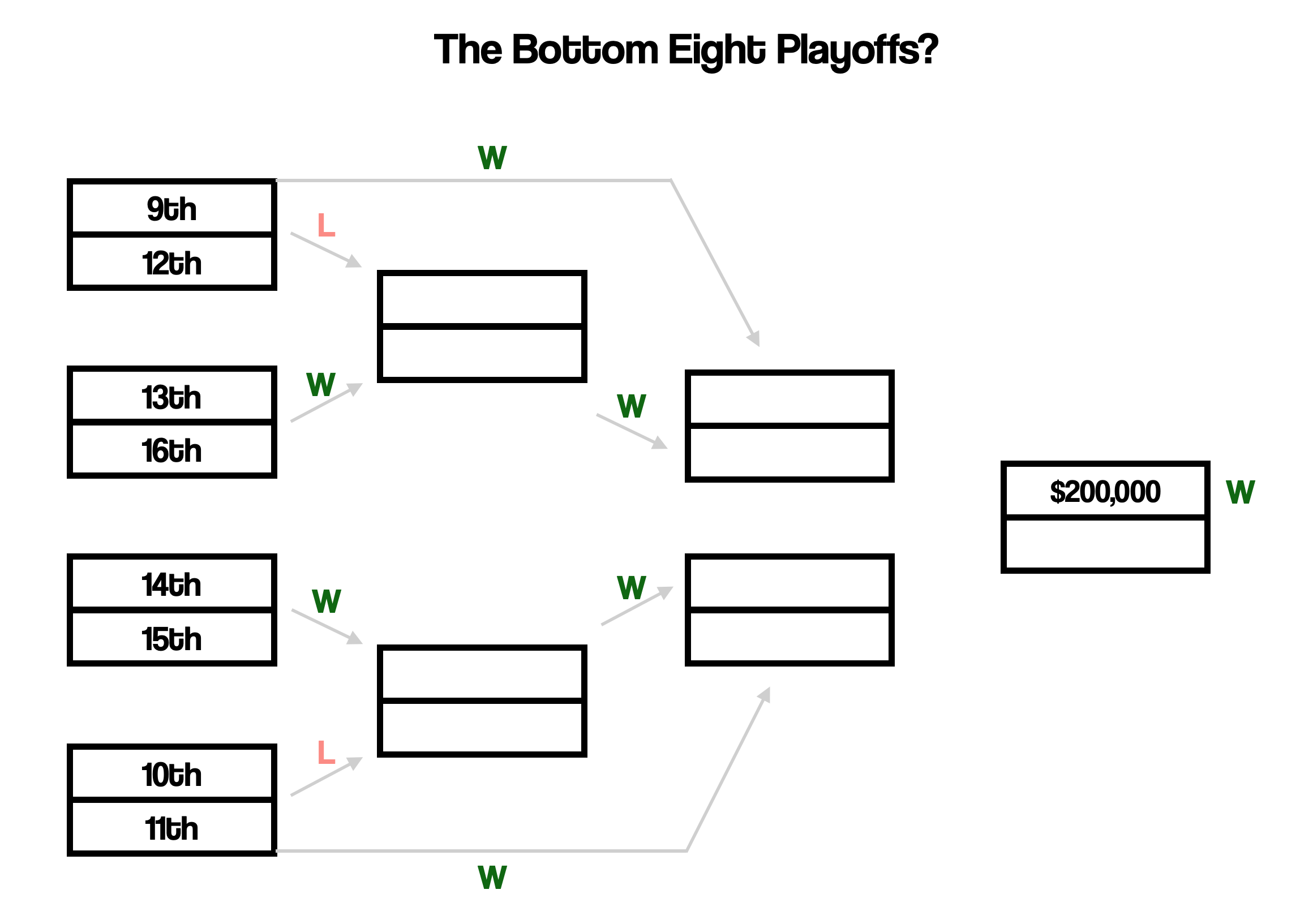 Player performance criteria: should it be a thing?

Watching big David Fifita score a breakaway try yesterday in front of frenzied Titans fans, I was reminded just what a supreme athlete he was. I was also prompted into remembering the eye-watering amount of money he earns per match.

With all of the talk over the past few years being about how little an NRL contract really means these days, should there be a way to ensure that you're always getting the best out of those you've contracted to represent your club?

And of course, we recently witnessed the bizarre comments from Isaiah Papali'i about whether or not he will fulfill his commitment to join the Wests Tigers in 2023, and the backlash from Tigers supporters stating unequivocally that they didn't want him if his heart wasn't in it.

So, for punters like me who are not privy to the content of an NRL player's contract, it is pondered whether or not players have Key Performance Indicators (KPI's) like most every day citizens have built into their employment contracts.

Does Fifita have a requirement to score one mesmerising break-away try per season in order to unlock the full contract dollar amount? Should he make the effort to become more involved, and to go looking for the ball because he has a KPI of 120m running metres per game?

Should a halfback have a minimum KPI of 15 try assists across the season? Should an entire playing group have a KPI of making the top eight?

Should bonuses provide incentives that can be offered outside of the salary cap?

Of course, concessions are to be made to account for absence through injury, but is this not the best way to get the most out of players who are essentially contracted employees of NRL clubs?

At least, that's the way many fans see it.