Team News: Jarrod Croker has a minor shoulder injury, meaning Sebastian Kris moves to the centres and Bailey Simonsson returns on the wing. Josh Papalii has been rested, with Joseph Tapine replacing him on the bench.

Prediction: What's happening down in Canberra? The Green Machine has fallen apart over the last few weeks, headlined by a loss to the Cowboys despite leading 24-6. South Sydney haven't lost since Round 1, though they've looked shaky this past fortnight, a golden point victory over the Tigers and a win on the Gold Coast despite trailing 24-10 at half-time.

Benji Marshall turned back time with Cody Walker deputising for Latrell at fullback, but regardless of how teams are fairing, GIO Stadium is never an easy away trip.

The Rabbitohs managed a 30-point second-half against the Titans last week, without Mitchell, a sign of their attacking prowess. Josh Papalii being 'rested' is a kind way of saying dropped, as Ricky Stuart clearly isn't afraid to sit his stars on the sideline if they aren't performing. Sticky has a bigger call on his hands in the near future, with little doubt the side looks stronger with a running hooker like Tom Starling at nine.

The Bunnies are favourites and deservedly so, but there's enough in this depleted Canberra outfit to cause an upset. If their halves come to play, anything could happen, but a Bunnies spine of Walker, Marshall, Reynolds and Cook has too many points it'd seem. Rabbits to claim their seventh straight win. Rabbitohs by 14.

Team News: George Jennings will miss the clash following a head knock, and towering Kiwi prop Nelson Asofa Solomona is rested for the round. Reimis Smith pushes to the wing, Tom Eisenhuth starts at centre, and duo Ryley Jacks and Chris Lewis are the new men on the bench.

Josh Dugan has been dropped, handing Will Chambers his club debut. Wade Graham and Aiden Tolman return to the starting side in the back-row and at prop respectively, pushing Teig Wilton and Braden Hamlin-Uele to the bench. Billy Magoulias drops off the interchange while Siosifa Talakai will miss four weeks through suspension. 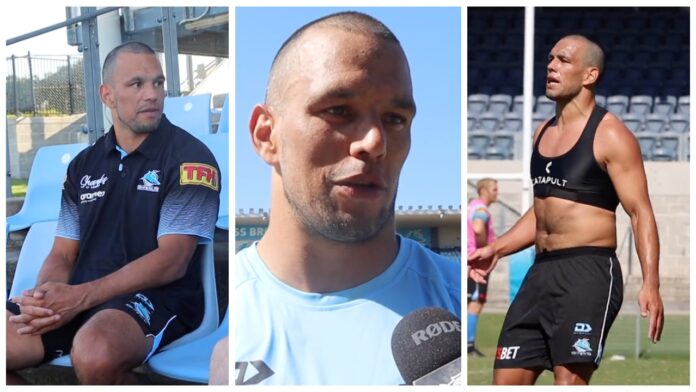 Prediction: A favourite son of the Melbourne Storm, Will Chambers, makes his club debut for Cronulla against his old side, adding another dimension to this rivalry. Melbourne are still missing Ryan Papenhuyzen, but you wouldn't tell with how well Nicho Hynes slotted into the side on ANZAC Day. No club has a better 'next man up' mentality than the Storm, courtesy of Craig Bellamy.

If Jahrome Hughes continues to play like he did last week, he's one of the best halfbacks in the NRL. It's crazy to think two years ago he wasn't even viewed as a half. Cronulla unfortunately looks almost ready to pack it in, losing to the Bulldogs last round. The John Morris sacking has well and truly taken a toll on this side, they'll be boosted by Adam Reynolds' signature, but it won't help them in 2021. It'll be an unhappy debut for Chambers as the Storm runaway with it late. Melbourne by 20.

Team News: Kevin Walters has dropped both starting halves, presenting a recall for Anthony Milford to partner Tyson Gamble at the scrum base. Jesse Arthars will play his first game of the season at centre, replacing David Mead.

Patrick Herbert suffered a calf injury last week, opening the door for Anthony Don to return to the side on the wing, pushing Phillip Sami into the centres. Sam Lisone is also out with a pec problem, paving the way for Herman Ese'ese to make his first appearance for the club.

Prediction: Someone has to bounce back here. Both leaked 40+ last Friday night and will be desperate to improve. The Titans had a big win back in Round 2 when these sides met, but times have changed, with Justin Holbrook's side leaking 92 points in three weeks. The Broncos will unleash their fourth halves pairing in eight weeks in Anthony Milford and Tyson Gamble, Tom Dearden's decision to leave the club has seen the young half dropped.

The mouth watering battle between David Fifita and Tevita Pangai Junior will go a long way to winning and losing this one, both hard running big men are in great form, Fifita in particular scoring two hat-tricks in three weeks. I think there could be an upset here. The game was over at half-time in their last meeting, and many have been burnt by saying this before, but I think we see some Anthony Milford magic this week. He sat in reserve grade, he's back in the first-grade halves now, it has to be now or never.

Leading by 14 and losing by 10 will hurt the Titans, and a slow start out of the blocks will get Brisbane into the contest, and earn them a rare victory. Brisbane by 4.

Team News: Api Koroisau comes straight into the side at the expense of Mitch Kenny.

Prediction: This was an absolute shellacking when these two clubs met a month ago, but Manly may be the form side right now. They've won three straight, Tom Trbojevic's return turning this side around completely. Penrith are still the best side in the competition, no doubt, but Manly may be able to throw a lot their way.

The game at Bathurst always attracts a packed house, with some extremely tight finishes in recent years. Penrith have actually lost their last two at the ground, but the 3:00pm timeslot should play into their favour. The Origin halfbacks come face-to-face, can Nathan Cleary be the man to neutralise Tommy Turbo? Can DCE's kicking game lower Brian To'o's involvement?

Penrith should win this clash, but don't expect the blowout the bookies are predicting, the Sea Eagles will be there to play. Penrith by 10.

Team News: Canterbury have named the same side that defeated Cronulla, though Dallin Watene-Zelezniak may return after being named in the reserves.

Ryan Matterson will finally make his return via the bench, dropping Wiremu Greig to the reserves. Will Smith has a broken thumb, and is replaced on the pine by Haze Dunster.

Prediction: Finally, they're on the board, Canterbury have a win. It was heartening to see Trent Barrett so emotional post-match, moments like that show how much the head coach cares about his players, and currently in talks with Toby Rudolf, they're on the rise. Parramatta are sitting second on the ladder after a trouncing of the Broncos last week, they're playing with a stack of confidence and will be up for this clash with their rivals.

The problem for the Eels last year was they suddenly forgot how to score points. They need their intensity up and not get complacent, because these are the kind of games where you can slouch and Canterbury lift to the occasion. Clint Gutherson is involving himself perfectly and letting the halves set their structure before injecting himself, they're simply too in-sync to be halted by the Bulldogs right now.  Parramatta by 19.

Team News: Adam O'Brien has resisted making changes to his 17. Lachlan Fitzgibbon has been named in the reserves, though is expected to gain some fitness in NSW Cup before returning.

Sam Verrills returns to the starting side, swapping spots with Ben Marschke who's named in jumper 14. Siosiua Taukeiaho has been named on the bench after missing last weeks clash. Fletcher Baker is the unlucky man who drops to the reserves.

Prediction: Hand Sam Walker the Dally M Rookie of the Year now, he's earned it. In his biggest NRL match so far, a packed house on ANZAC Day, he controlled the contest from start to finish. The Knights were impressive in their defeat, sticking with Penrith for the first hour of the contest, only to fall away in the final quarter of the match, but the ability, the grit was there from the Novacastrians.

It could be the match of the round. Kalyn Ponga's won six straight at McDonald Jones, but you can't help but feel James Tedesco is due for a massive match, and the Roosters custodian has a habit of sniffing out a try at the ground, scoring in three of his five clashes there, and in six of nine against the Knights in general.

The game will be won and lost in the opening period, if Daniel Saifiti and David Klemmer can lay a platform, the Knights are a massive chance, but with the way Walker is playing, the Chooks to win in a thriller. Roosters by 2.

Team News: There's a big reshuffle in the Warriors backline. Reece Walsh moves to five-eighth as Roger Tuivasa-Sheck returns to fullback, and Adam Pompey returns in place of Marcelo Montoya. David Fusitu'a is also back, Bayley Sironen drops to the bench and Tom Ale drops to the reserves. Jack Murchie also drops to the reserves list, with Ben Murdoch-Masilla starting in the back-row, Tohu Harris comes back into the side at lock, and Jazz Tevaga is named on the bench.

Jason Taumalolo is set to play his first game since Round 1, with the enigmatic lock's return from a broken hand forcing Lachlan Burr back to the bench, and back-rower Mitchell Dunn out of the side following a suspension.

Prediction: This Reece Walsh, he's going to be a special one. Despite debuting in one of the competition's hardest road trips, on one of the most emotionally charged days on the calendar, Walsh had two try-assists and five tackle breaks despite a heavy loss. But can he play five-eighth? Defending in the front line is a massive task, especially against a behemoth like the returning Jason Taumalolo. They've won three in a row without him, will his comeback be a disruption to their style, or a massive in for Todd Payten's side.

New Zealand has a handy home ground advantage at the Central Coast Stadium, and should be an interesting return for Payten. He was the Warriors board's first choice as head coach, now coming back and facing off against his former side, there's some added motivation there. While they're still missing a stack of troops, the Warriors have enough strike to get the job done here and end the Cowboys winning streak.

It's going to be a high scoring affair, expect 20+ points from both sides, but the Warriors will run out and claim the two competition points, on the back of Walsh and captain RTS. Warriors by 12.

Team News: Ben Hunt is back in the side at halfback, pushing Jack Bird back into the centres, and Cody Ramsey to the wing for the suspended Jordan Pereira. Mikaele Ravalawa is also missing through suspension, handing Max Feagai an opportunity on the wing.

Joey Leilua returns at centre in a straight swap for Michael Chee Kam. There's a reshuffle in the forward pack, Alex Twal moves from lock to prop, Joe Ofahengaue goes from the back-row to lock, Luke Garner starts on an edge while Stefano Utoikamanu drops to the bench. Thomas Mikaele replaces Zane Musgrove on the bench.

Prediction: The Dragons played one of their worst games of the season last week, but you can't possibly tip the Tigers right now. They've won one of seven this year, their only victory coming in a scrappy affair against the Knights. They were well below average against Manly, and with Ben Hunt returning, this could be a similar outcome.

There's some shining lights for Wests still, Daine Laurie, Stefano Utoikamanu and Adam Doueihi to name a few, but the Dragons look too strong to be troubled by the toothless Tigers.

The Red V's forward pack is building, and with Hunt returning, Dufty sniffing around the ruck and Josh McGuire bringing some starch to their pack, the Dragons should win this clash well. Dragons by 16.