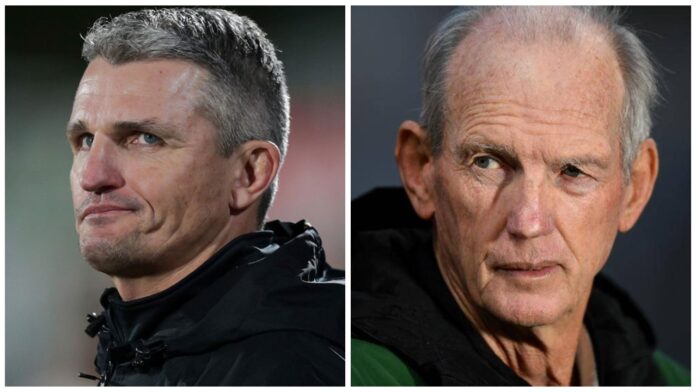 Speaking first following his heavily favoured side's loss, Cleary continued espousing his contention from earlier in the week that Bennett's Bunnies had previously employed suspect fifth tackle tactics to curb the influence of his son and star halfback, Nathan.

“I was personally guilty of trying to put our case forward this week, only because I had to. I had to respond,” Cleary said.

The 50-year-old then subtly suggested that Bennett's retorting claims that the Panthers often deployed illegal blockers to protect the playmaker were designed to force match officials hands.

“This is probably not the forum to talk about it but the NRL has got to make a decision about whether they are going to allow coaches to deliberately manipulate referees and try influence them," Cleary continued.

“Coaches do it because they can. We get fined afterwards but pre-game it is pretty much open slather.

“Our boys have certainly been spoken to on the run for stuff we never get done for so I’d suggest that type of thing has an influence.

“I was guilty of it myself because I had to but I think the game could do itself a favour and come down hard on any coach who deliberately tries to influence a match official before the game.”

When quizzed about the validity of Bennett's views and whether they had crossed a line, Cleary provided a swipe at the game's adjudicators.

"Has he [Bennett] been sanctioned for it? No. If you allow it to happen, it will happen. It’s up to the NRL. If they don’t care it’s fine," he said.

“The referee’s department spend way too much time going through complaints from coaches every week. I occasionally do it.

“I think how is the referee’s department supposed to get better when they are basically clogged up with constantly having to deal with clubs complaining throughout the week.”

Predictably, Bennett's response to these fresh assertations came with more than a tinge of terseness.

"I didn’t start the conversation publicly,” Bennett said of the back and forth argument.

“I said nothing publicly. This happened three weeks ago. I sent some information to the referees for clarification.

“So I wasn’t going public with anything until Penrith started to come out and they started the public statements.

“I just responded to those. I wasn’t going to sit back and not stand up for my team and my players.”

Despite what many have perceived as a simmering level of animosity, the 71-year-old mastercoach agreed with his younger peer in the belief that claims from coaches should never have an influence over the outcomes of games.

“Well I couldn’t agree with him more on that but that’s why I didn’t say anything,” he said.

“I never said anything for three weeks. We played them three weeks ago. He was the one that came out and started mouthing off.

“South Sydney had no say whatsoever until he started to come out and talk it all up.”

Bennett continued by stating that although views, notions and opinions were often expressed by those that call the coaching box home, they had never once influenced the person with the whistle.

“There is no public manipulation [of referees],” Bennett replied.

“I saw an incident in a game that I didn’t like. And surely it is my right to ask the referees what their interpretation of that is and that’s what I did. That’s process.

“If that’s manipulating the game you are all kidding yourselves. That is manipulating nobody and if the referees can’t handle that and I’m sure they can because I’m not the only coach who has ever questioned some of their decision making and that’s what they are there for.

“But keep it in house. I didn’t put it out on the front pages. I never said a word. Three weeks ago I did it. Three weeks.”

Irrespective of Cleary's views that the coaching fraternity held too much sway over officials, Bennett suggested that men from the foot of the blue mountains were no angels when it came to seeking clarification via telephone conversations.

“Well they (Penrith) do it,” he explained.

“And we should have that right. You can’t take that away from us. But the public comment yeah I’m a fan of that. But as I said I didn’t start this one.”

Bennett revealed that he had twice called officials this season to understand refereeing interpretations and that it was his right as a head coach to do so.

“I have done it twice this year that is all I’ve done,” Bennett said.

“That’s what they are there for. We know what the rules are. They interpret the rules well if they have got a different slant on it to us then I have got to know that. I have got to talk to them about that.

“I’ve got to say the conversations are cordial and no one is carrying on and I was happy with their response. But I left it there. I didn’t tell you people. I wasn’t the one that started it.”

The wily steward then signed off by openly suggesting that his vanquished opponent had kickstarted the public discourse surrounding decision making.

“Well Ivan did because it came out,” Bennett expressed to a question posed during his press conference.

“Well he worked for the referees before he went back into coaching. I’ve got to assume he has got some mates there still.

“But that’s not my problem. It is not my department. I’m just telling you the background to it.

“But I don’t know why you are all going on about it all because it takes away all your headlines.

“Someone might do something about it and then you might not have your headlines. It was good theatre wasn’t it? It got everyone pumped up a little bit. That’s what it is about.”

Bennett's band of Bunnies will enjoy a week off before they play the winner of next week's semi-final between Sydney and Manly.

Penrith's route to glory must now come via the hard road with their defeat consigning them to an elimination date against either Parramatta or Newcastle next weekend.