Australia have claimed their third consecutive World Cup title after a dominant 30-10 victory over Toa Samoa, in the pacific nation's first-ever appearance in the tournament's decider.

The sun set on a packed Old Trafford as both nation's lined up to sing their national anthems, but it was Samoa's Siva Tau that set the mood for the match sit has the past few weeks, igniting the flame and delivering goosebumps simultaneously.

Controversy didn't stray early in the piece, as an Anthony Milford attempted 40/20 was swatted back into play by Kangaroo captain James Tedesco, only for replays to show the custodian had his foot on the touchline as he batted the ball back in.

A special moment not just for @RLSamoa, but for rugby league.

Despite a forward pass from Ben Hunt on halfway, the Kangaroos held firm, and capitalised after Milford gave away a seven-tackle set 12 minutes into the contest.

Jack Wighton rushed to the 20 metre line for the quick-tap and found Valentine Holmes, the Cowboys flyer racing 60 metres before being chopped down.

It would only take a few plays before Nathan Cleary swung around to the left, delivering a perfect short-pass to Latrell Mitchell who dummied left, burst through the line and swatted off Joseph Suaalii like a fly in the outback, touching down for the opener.

A shellshocked Samoa conceded again minutes later after Josh Addo-Carr burst between Jarome Luai and Oregon Kaufusi into the clear, drawing Suaalii and putting Tedesco away under the posts for a 10-0 lead. 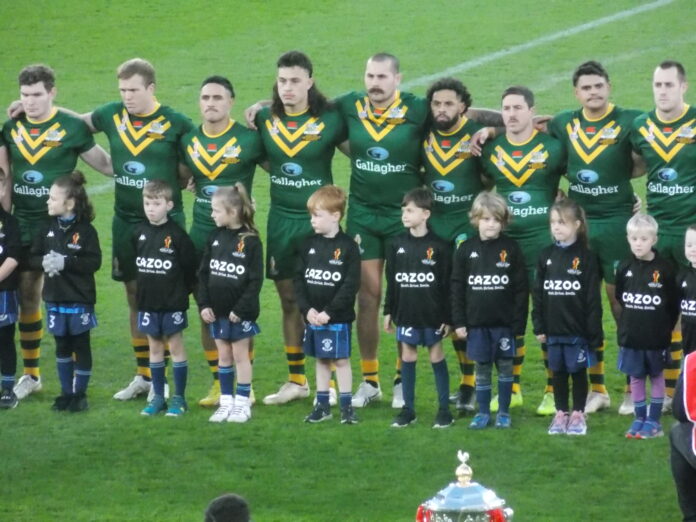 A Latrell Mitchell error as he looked to score his second handed possession back to the Samoans, who looked to have opened their account through a darting Chanel Harris-Tavita, only for the retiring half to be held up in-goal.

Milford would bobble the ball the next play into the hands of Jack Wighton, and squandering yet another opportunity.

Australia would make the most of their possession at the other end of the pitch, Liam Martin's barnstorming effort confirmed by the video referee, pushing the lead out to 14-0 in front of a vocal crowd.

The Kangaroos would earn themselves a repeat set just minutes later, only for the half-time siren to sound as Samoa lined up to take the dropout, sending both sides into the sheds as Australia held onto a 14-0 lead.

The match feel back into an arm wrestle early into the second stanza, before Sydney Roosters second-rower Angus Crichton lit the fuse after knocking out the retiring Chanel Harris-Tavita, and potentially bringing his rugby league career to a close.

Crichton's pass to Holmes was dropped cold, however the forward raised his forearm at Harris-Tavita as the hooker came in to make a tackle, striking him in the head, and ultimately sending the Kangaroo to the bin for ten minutes.

It wouldn't matter though, as Cleary produced another try-assist, this time a short-ball to South Sydney skipper Cameron Murray, fresh off scoring the match-winner against the Kiwis.

The Kangaroos would squander a chance as Crichton re-entered the fray, and the forward would bomb an easy try just minutes later as he fumbled an Addo-Carr grubber for the simplest of tries.

Samoa would capitalise when Australia couldn't, Latrell Mitchell's attempted intercept of a long Luai pass all for nothing as Manly-bound Kelma Tuilagi caught the ball, drawing the Foxx and sending Brian To'o over untouched.

In a few moments of madness, Australia extended their lead as their entire spine combined for James Tedesco's second, an inside-ball from Munster sending his skipper over before Stephen Crichton had another Stephen Crichton moment. 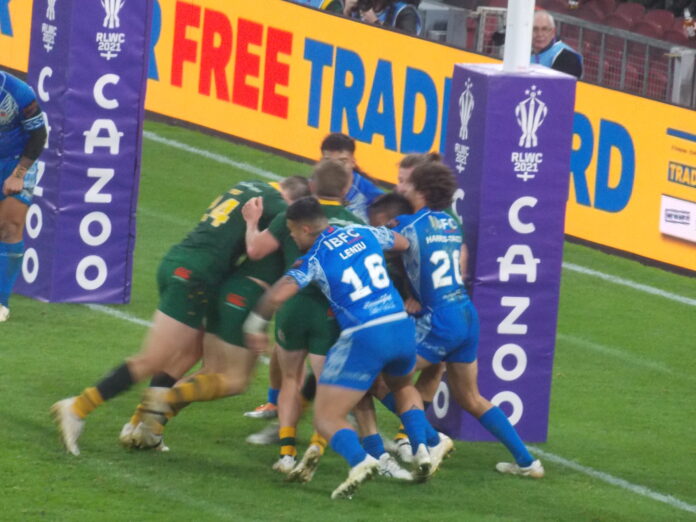 Ben Hunt ducked out of dummy-half to throw a short-ball to Mitchell, only for Crichton to race out off dummy-half and pick off the pass, touching down for another memorable intercept try in a big game.

However, it was Australia that had the last laugh as Cleary put Latrell Mitchell over for a well-earned double as the siren sounded, Crichton attempting another intercept, however this time he couldn't capture the moment.

A cheeky Addo-Carr ran up for the conversion, only to spray the kick wide with a grin on his face in front of 67,502 screaming fans.

Despite the loss, it's a monumental moment for Samoa, who have emerged from the shadows to become just the sixth nation in history to feature in a World Cup final.