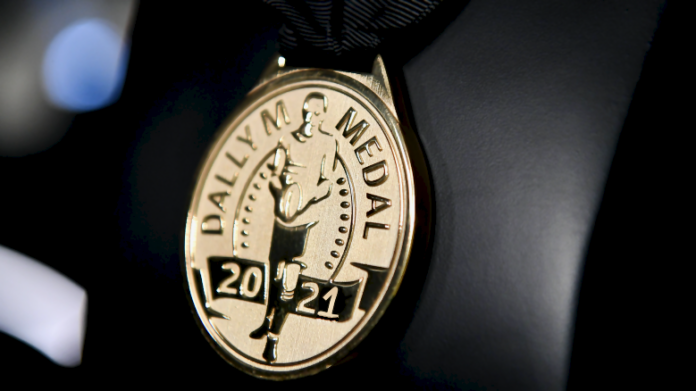 The NRL grand final is here, and while there is just one game left in the season, the Dally M awards will also bring with it a significant amount of attention this week.

While last year's Dally M winner Tom Trbojevic was a shoe-in with week's left in the regular season, this year has been absolutely air tight, with plenty of players seemingly in the running for the award.

There's a host of candidates, not just for the main accolade, but for the positional spots across the board, with every position tossing up different attributes and skillsets.

We'll run our eye over who's stood out in 2022, and who will be taking home the prestigious awards on September 26.

Dally M Fullback of the Year:

There's never been such a wide array of quality fullbacks in the competition, it's hard to narrow it down to five. Despite his massive impact on his club as well as averaging the most try-assists per game, Latrell Mitchell's early season injury leaves him short compared to competitors.

Drinkwater also missed the start of the season though hit the ground running, and is a massive cog in this North Queensland machine. Though despite how influential he is on the side, some other key components, like Chad Townsend and Reece Robson, will steal points. James Tedesco is James Tedesco, he'll be in the running for as long as he plays, 213 average running metres plus a dozen tries and a dozen assists, he's a freak.

Clint Gutherson is Mr Consistent, playing every game for Parramatta this season, and is always there backing up, always there to make the tackle. Dylan Edwards is the same, though he's gone up a gear in 2022, and outshone the likes of Nathan Cleary and Jarome Luai at times, which is no mean feat.

Dally M Wingers of the Year

There's a lot of honourable mentions for this category as well, however these four delivered a lot of different attributes through the year, though all spectacular in their plight.

Alex Johnston is from another planet, following his 2021 efforts of 30 tries with an almost identical number, sitting at 30 four-pointers with a maximum of two games remaining.

The remaining three are all rookies in their second year of first-grade, making the massive leap up this season. Taylan May has been so strong that he's forced superstar Brian To'o to the right edge, while Selwyn Cobbo shook off a slow opening month to becoming a prolific try-scorer as well as a Queensland Origin player. Joseph Suaalii is walking highlight reel and only just turned 19, there's a big horizon for this award.

Dally M Centres of the Year

If this was your first season watching rugby league, you'd be forgiven for assuming Holmes has played his entire career in the centres. The Queenslander has been suburb in his shift inwards, at both club level and the Origin arena. Crichton entered the New South Wales himself this year, but struggled on the big stage.

Justin Olam is a human wrecking ball that isn't afraid to just run straight through you. He's a reigning Centre of the Year medalist, and a massive reason that opposition sides are weary when attacking to their right. Joseph Manu could play anywhere on the field and be an 11/10, naturally talented and just blessed with this sheer awareness of everything going on around him, he'll most likely play fullback for the Kiwis at the World Cup.

Dally M Five-Eighth of the Year

Another wide-open race, it's easy to argue that Brown and Dearden have played career-best football in 2022, and are a massive factor to why their team is competitive right now. Brown only registered two-try assists last season, shambolic compared to this year.

Burton will be one of the only Bulldogs to play every game this season, as well as making his Blues debut, missing the finals hurts, as does a slow start. Cameron Munster missed Round 1 through suspension, but without important cogs, 'Munny' has stood up massively.

Luai will always poll while he's in that dominant Panthers side, however missing the backend with a knee injury and a subpar Origin series will see him fall short.

Dally M Halfback of the Year

It's a different looking halfback field this season, with Cherry-Evans missing the jump while Nathan Cleary isn't eligible after copping a massive five-game suspension. Mitch Moses' 1.1 try-assists per game is only second to Latrell Mitchell, though he did miss late season games with a thumb injury.

Jahrome Hughes also missed matches despite a strong year, while Chad Townsend's influence on the side turned them around, but he isn't the star on that team, he's the one that steadies the ship.

Similarly to the main award, it comes down to Hunt and Hynes, and as good as Nicho has been, especially in his first year wearing the seven, Hunt's poise has single-handedly turned the Red V from cellar dwellers to competitive, he's been on another level.

Dally M Props of the Year

There's a lot of unsung props in the NRL that deserve a mention here, veterans, some of the form props of the last month or so couldn't make the list. Journalist Buzz Rothfield believes Matt Lodge might play for Australia, and he may, but even he hasn't made this list.

Campbell-Gillard has played every game this season for Parramatta as well as a return to the Origin arena, while Payne Haas' quest for a million-dollar contract hit minor snags, but averaging over 160 metres a game can't hurt.

Joseph Tapine, well the former Knight is in the running for the top award of the night, he'll be one recipient after far-and-away a career-best season. James Fisher-Harris' two-match suspension will cost him points but he is dominant, the award goes to show just how strong New Zealand will be at the World Cup.

Dally M Hooker of the Year

Four running hookers is a feeling tale of the current state of the game, the 'six again' introduces fatigue which gives crafty rakes like these room to wreak havoc on the ruck.

Cook has been among the candidates every year since 2018, though the hooker has been sluggish at times throughout 2022. While he is still very much in the mix for the Kangaroos jersey, Harry Grant is hot on his tail after making the starting hooker role his own. Without Ryan Papenehuyzen, Munster and Hughes for large chunks, Grant has stood tall. Not literally.

Apisai Koroisau's absence will haunt Penrith next season, but right now he's the incumbent New South Wales hooker and hitting his straps at the right time. The Fijian international is a massive beneficiary of the Panthers' pack, something he'll miss next year.

Robson is enjoying his breakout season, so much so that Mal Meninga is reportedly considering taking the Cowboys hooker across to England at seasons end. The Dragons junior, similarly to Koroisau, plays behind a robust, mobile pack, featuring the likes of Reuben Cotter, Jason Taumalolo and Jeremiah Nanai, he's making the most of his opportunity.

Dally M Second-Rowers of the Year

Similarly to prop, the back-row is a heavily congested position stacked with talent, and a lot of different forms of it.

Parramatta, who score two of the four nominations, summarise it best, with a light-footed lanky back-rower in Shaun Lane that's register 12 try assists this year, and then a hulking behemoth in Isaiah Papali'i.

Jeremiah Nanai has crossed for a whopping 17 tries in 20 games this season for the Cowboys, while Keaon Koloamatangi has restored some grunt to the Rabbitohs' right edge, running for nearly 140 metres out wide each game.

Kikau has been a mainstay on the left throughout this Penrith dynasty, and hasn't the Fijian international been dynamic in his final season at the foot of the mountains, his subtle speed and footwork combined with his increasing ball-playing ability making him one of the more feared edge forwards in the game.

Dally M Lock of the Year

Another stacked position, the modern day lock has rapidly shifted over the last decade from essentially a third prop, to a more nimble player that can ball-play and get the side a quick play-the-ball.We've seen halves like Connor Watson and Kurt Mann mould into this new breed, and they can dominate a game.

Jason Taumalolo is a little more old school, he's got fantastic footwork for a 120kg wrecking ball and immense speed, he's rebounded well after a disappointing 2021. Ryan Matterson meanwhile has found a new home wearing the No. 13, his offloads killing defensive lines, earning a maiden Blues jumper in the process.

Then you've got the thoroughbreds, Isaah Yeo and Cameron Murray. Arguably the two most influential locks in the game, both are as smart as they are talented, and provide the perfect link between the forwards and the halves. While Murray is more agile, Yeo is tougher, the two are neck-and-neck. It's close, but Yeo just has a few more runs on the board this season.

Dally M Team of the Year

The official award ceremony will take place on Wednesday, September 28, in the lead-up to the NRL Grand Final.

You can check back to Zero Tackle tomorrow to see who will be winning all of the other awards.

Mahoney ready for leadership role in new-look Bulldogs side