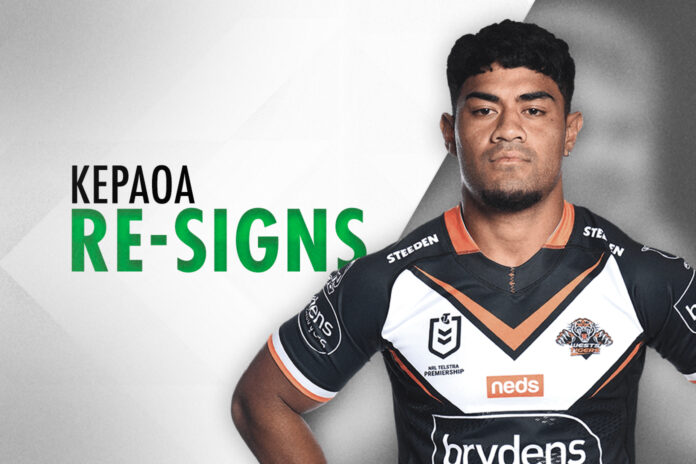 Wests Tigers have today announced they’ve secured the services of talented young centre Asu Kepaoa until the end of 2024.

Kepaoa made his debut for the Tigers back in 2020 but has only made a total of 17 NRL appearances since then, thanks largely to a crushing ACL injury suffered in April last year ruling him out for the majority of the 2021 season.

His hopes for 2022 were dealt another blow when he tore a pectoral muscle in pre-season, but he finally returned in Round 8 against the Dragons in Wollongong.

After such a long time out with injuries, Kepaoa said a desire to repay the club for standing by him was a determining factor when it came to extending his contract.

“All I want to do now is give back to the club,” Kepaoa said in a release.

“Wests Tigers have shown faith in me and the club has done so much for me and my family.

“There’s still a long way to go for me in my development as a player. I’m learning every day and I wouldn’t want to do it in any other colours.

“I think the club and the team is in a great position to build over the next few years.”

Tigers CEO Justin Pascoe said the contract extension had been earned by Kepaoa, through both his hardships and efforts around the club.

“It’s wonderful to see AJ back to fitness and playing some good football,” Pascoe said.

“He’s had a rough patch with injury and this contract extension rewards (his) hard work and self-belief.”

Kepaoa has been in solid form of late, with two tries in his past three outings as the Tigers try to salvage something from a poor 2022 campaign.

The Tigers host the Cronulla Sharks this Saturday at Scullly Park in Tamworth. Kick-off is at 5.35pm (AEST).