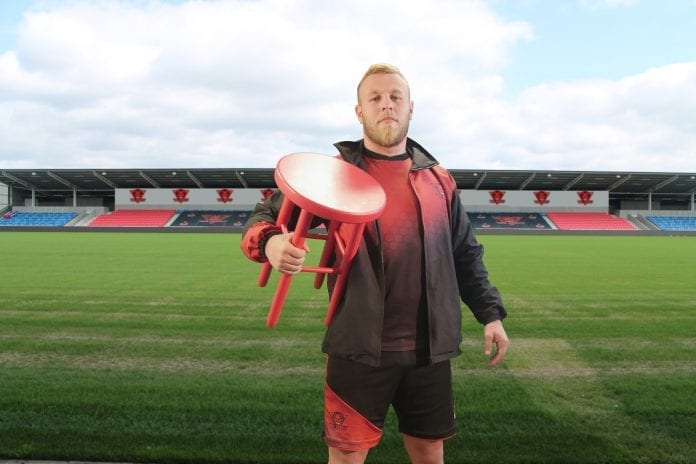 Rugby league stars Josh Jones and George Griffin are throwing their weight behind a new campaign encouraging men to be in their mate’s corner.

With 1 in 4 people fighting a mental health problem in any given year, Jones and Griffin are calling on men to step in if their mate is acting differently as part of Time to Change’s newly launched, ‘In your Corner’ campaign. The campaign, which has also received backing from sports stars Clarke Carlisle, Frank Bruno, Justin Rose and Ricky Hatton, highlights that you don’t need to be an expert to be there to support a friend with a mental health problem.

Appearing in a photoshoot to support the campaign, Jones and Griffin talk about life as a rugby league player having many highs. However, the risk of injury and the pressures of elite sport can put a strain on a players’ mental health. This is backed up by research into elite athletes and mental health which shows that depression can be connected to sport-related factors such as injuries, overtraining, stress and performance failure.

Similar photo shoots have taken place with former England cricketers and professional jockeys, showing the sportsmen sat on Time to Change’s ‘In Your Corner stool’ – a prominent feature of the campaign’s film which symbolises being there for a friend.

State of Mind, The Rugby Players’ Association and The Rugby Football League are among organisations taking strides to help make an industry-wide difference to tackling mental health stigma and promoting mental well-being and resilience through their commitment to the Mental Health Charter for Sport and Recreation.

English professional rugby league player, Josh Jones, who currently plays for Salford Red Devils in the Super League, has backed Time to Change’s In Your Corner campaign. He said:

“I’m supporting Time to Change’s ‘In Your Corner’ campaign because I know just how important it is to have people around you when things get tough.

“My biggest challenge mentally has been with anxiety and depression. It came to the fore for me last year, it had probably been going on for a number of years. I’d never spoke about it and it got bigger and bigger until one day, I was probably ready to chuck it in and be done with rugby league. Luckily I had the support of those around me, got the right help and I’m slowly getting back to be where I need to be.

“Being there for a mate going through a difficult time probably isn’t as hard as you might think. My biggest piece of advice? Take the time to listen, just being there for your mate, showing that you care, can make all the difference.” “It’s so important that we encourage everyone to look out for those closest to them. That’s why I’m backing Time to Change’s ‘In Your Corner,’ a campaign which asks men to step in if their mate is acting differently.

“The main barrier is trying to not look soft. Men and especially rugby players seem to think they need to be tough and talking about mental health is a weakness. Sometimes the stresses and strains of the game can take its toll. Everyone always wants to impress and make people proud, not just others but themselves. If performances drop and people notice and voice their opinion it can be hard to get confidence back.

“But being part of a team is awesome and having people in the wings if you do need support is invaluable. The atmosphere and camaraderie amongst the boys is great.”

“One of my team mates had just lost his dad’s partner and was really down. He took on a lot of stress looking after his dad and getting him back on his feet. I just helped him by being a person to talk to and do everyday things with to try get back to reality. “We’re delighted that rugby league stars Josh Jones and George Griffin are throwing their weight behind our campaign to improve attitudes towards mental health. Their support will help us spread the message across the rugby league community that men should be looking out for each other’s mental health as part of being a good mate. Doing this would mean fewer men facing mental health problems alone and fewer lives ruined. That’s why we have launched our In Your Corner campaign – if a friend’s acting differently, step in, find out why and be there to support.”

Time to Change launched ‘In Your Corner’ in February to encourage men to be more open and supportive of friends, family and colleagues with a mental health problem. The campaign will run for five years but in the first month alone 18.5 million people have seen the launch film. Of this 1 in 3 men who saw the campaign film either did something to help a mate or said they were planning to.

There are three steps people can take if they think a friend is struggling:

To find out more information about the campaign and how you can get involved, visit: www.time-to-change.org.uk/inyourcorner