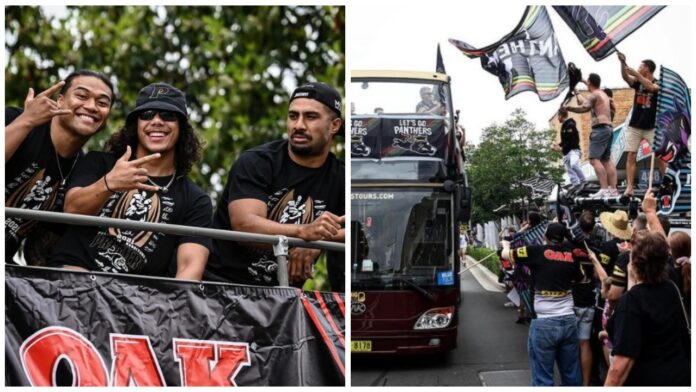 Penrith's latest premiership heroes have taken to the streets in an effort to party with their people for the first time since getting their claws of the Provan-Summons Trophy in early October.

With Covid regulations necessitating a celebration of a different flavour, the men from the feet of the Blue Mountains made their way down High and Station Streets in a decked out double-decker on Saturday morning.

GET HYPED. At last we celebrate with the Penrith faithful. #pantherpride 🐾 pic.twitter.com/jtkvy4CAnz

Despite spirits naturally being high amongst Ivan Cleary's champion side that saw off Souths in the season's decider, star five-eighth Jarome Luai couldn't help but sneak a good-natured dig at soon to be Dog Viliame Kikau.

Having kickstarted their parade at 10 am in Sydney's west, the victorious Panthers - minus Tyrone May and unvaccinated rake Api Koroisau - then made their way onto BlueBet Stadium to the applause of a packed grandstand.

Penrith announced on Wednesday in an official statement that the club's stars were also set to re-live the events of the club's third competition win throughout the joyous afternoon.

Although the all-ticketed event was likely to have seen a series of fans turned away from the festivities, Penrith's recent collaboration with Tooheys Brewers means that the party doesn't have to stop just yet.

JUST IN 🍻 These won't last! Get your commemorative Tooheys New can from your nearest club today.#pantherpride 🐾 pic.twitter.com/AOeFKaVacZ

While there is expected to be a bevy of sore heads found between Mount Druitt and Glenbrook on Sunday, Cleary's Panther cubs are still the bookmaker's favourite to repeat their efforts again in 2022.