With the news that Payne Haas has ruled himself out of the upcoming World Cup as he focuses on ensuring he's in shape for next year, we’re bound to once again hear questions about whether or not Mal Meninga should select Matt Lodge to fill the void in the Kangaroos’ forward pack.

On the surface, it’s a straightforward decision. Few could argue that Lodge had been one of the game's most impressive front-rowers of the final weeks of the NRL season.

His sudden mid-season move from the Warriors to the Roosters marked a reversal in fortunes for the Tri-colours, who immediately ended their slump and went on a winning streak that carried them all the way to the first week of the finals.

He’s also gone about it quietly, attracting none of the attention that was being fought for every week by Nelson Asofa-Solomona and Lodge’s Roosters team mate Jared Waerea-Hargreaves. He didn’t even come out making his own case for selection, and it’s been made by plenty.

But of course, it’s not just about form.

Mal Meninga is facing a crisis at the selection table as more and more players decide not to partake in the end-of-season tournament due to injury or load management, and others opt to represent their home or heritage nations instead of the green and gold.

Within the last 48 hours, two more dual-eligibility prospects have decided to represent other nations, with Sebastian Kris picking New Zealand and Joseph Suaali’i deciding to represent Samoa, despite Meninga’s effusive praise of the youngster as a Kangaroos prospect just a few weeks ago.

Of the props who played in this year’s State of Origin series, Haas has withdrawn, while Josh Papalii has opted to represent Samoa along with Junior Paulo. Lindsay Collins’ season was ended early by repeated concussions and that creates issues over his selection. Reagan Campbell-Gillard and Jacob Saifiti have both been named in a preliminary Fijian squad. Even Bulldog Max King wants to represent England.

Tino Fa’asuamaleaui is likely to represent the Kangaroos, and Tom Gilbert will be eligible, but while they've both been excellent, has either been better decidedly than Lodge at season's end?

There are plenty of options in the No.13 who could play front row as well, with Jake Trbojevic already fulfilling the role during the Origin series, but it ultimately seems an area where withdrawals have left the Kangaroos with a genuine manpower problem.

If you’re a fan of the idea that representative teams should be picked on form over incumbency, then it's a straightforward claim that Lodge should be considered for the team.

But we know it’s not that simple.

Lodge’s return to the NRL in 2018 was fraught with controversy, and even though he’s been back for years his status in the game continues to raise a lot of questions.

How long should a player’s negative actions hang over them? Should these young men be entitled to forgiveness? Should someone be allowed back onto the field after committing a violent act, let alone be eligible to represent their country? With two situations rarely the same, it’s been a difficult area for the NRL and integrity unit to employ a consistent approach.

As much as the form argument sides in favour of Lodge’s selection, it’s hard to look back on his New York spree in 2015 and separate that young idiot from the man he is today, no matter how openly he speaks on it and owns his mistakes or how admirably he conducts himself.

The footage of someone without any control, who opted to threaten, stalk and intimidate, making maniacal death threats against women before assaulting someone who was simply trying to help is disturbing, and that’s before you consider the fact he forced his way into this person’s apartment and continued the rampage, breaking furniture and terrifying children.

It’s impossible to watch it and simultaneously hold the opinion that this person deserves a call-up to the game’s most esteemed team.

If there wasn’t CCTV footage, it’s less likely this conversation would be stuck where it is. Ugly doesn’t begin to describe it. It's hard not to watch it and put yourself in the shoes of the victim, and wonder how you'd feel about someone who did this to you and your family being rewarded with a professional honour, no matter how much time has passed. 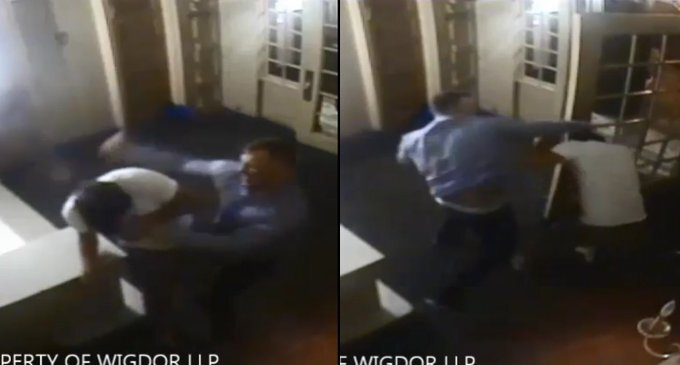 Though the judiciary has made its decision, Lodge has met the requirements of return that were put before him and suffered the jeers and treatment of opposing fans until it all ultimately subsided, watching the video again and hearing the first-hand account from the victims negates everything he’s done since in an instant.

I’m not saying that it should – surely there comes a point where, regardless of redemption, we can move on from letting a single moment in history define someone – but for me personally, it’s impossible to deny the visceral impact of the video, and I'm not alone in that thinking.

It also shouldn’t be forgotten that Lodge was the beneficiary of a plea deal and avoided jail time, despite the assault, harassment, forced entry and malicious damage of property that all occurred on that night and the emotional scars he’s left the victims and their young family.

It’s hard to imagine that he would have received any of the treatment he did from the army of attending NYPD officers who arrived to arrest him had he not been a white male.

Regardless, his return to the NRL with Brisbane was hugely divisive, with many believing that he should never have been allowed back into the game.

But the decision had been made, and the NRL couldn’t simply backtrack in response to public outrage - at least not back then.

By the middle of the season, the boos had stopped and the issue seemed to have faded into obscurity.

Yet less than 12 months later, the NRL’s no-fault stand-down policy had been introduced and Ben Barba had been banned for life after the league viewed footage of him assaulting his partner at a Queensland casino - a comparable incident with a wildly different result.

Though Lodge had squeaked through the gates, the NRL had clearly noted the public response to his inclusion and taken a hard stance in an attempt to standardise a response.

Results have been mixed in the time since, but it’s clear that despite the issues and challenges the league faces – even more recently with Taylan May’s comedically delayed suspension – they’re trying to take a hard stance on players bringing the game into disrepute.

If we decide to draw the line at Lodge playing for the Kangaroos after being back in the game so long, what are we saying? That he’s good enough to be a role model for fans of the NRL, but he’s not the kind of person we want representing our country? Those positions seem to contradict each other.

Regardless of how you feel about him, Lodge has already confirmed that representing Australia is still ‘a dream’, as it likely is for any professional footballer.

So if he hasn’t earned the right after applying himself for five years and doing everything that’s been asked of him by the administration, why the hell did we let him back in the first place?

Is it fair to leave him dangling in a limbo of constant judgement, telling him that his professional life will be permanently limited by something he did nearly seven years ago, no matter how well he plays now or in the future?

That's pretty rough for Lodge - but it's also nowhere near as rough as his actions in 2015.

Mal Meninga is stuck between a rock and a hard place on this issue, and the constant withdrawals aren’t making it any easier. He may be left with no other option but to bring Lodge in, but if the Roosters prop were to suddenly become one of those withdrawals, the moral issue created by even considering him could be removed with ease.

Unlike the legacy that will remain for many every time he's mentioned.