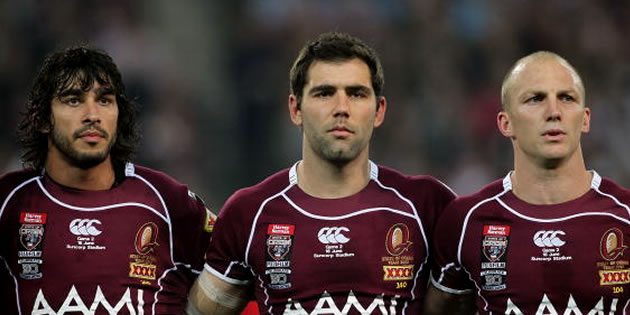 The immortal debate has once again arisen in the past few days, with the possibility that we may be seeing four future immortals playing in this year’s finals series.

Greg Inglis, Cameron Smith, Billy Slater and Johnathan Thurston are the names most openly floated from the modern era, while Darren Lockyer and Mal Meninga’s names are never too far in terms of recent retirees.

First of all I want to dispel this ridiculous notion that you can’t induct two or more immortals from the same era.

Although there have only been eight immortals announced since the formation of the game, if players are good enough, they quality, regardless of how good other players in their generation are.

In terms of current immortals, I had only seen Andrew Johns play regularly, while I caught the tail end of Wally Lewis’s career.

Johns is the best player I have ever seen lace a boot. The way he tore teams to shreds was an absolute joy to watch, except when it was my side being torn apart.

I can only really compare current players to Johns when it comes to getting the nod, as Lewis was playing on the Gold Coast in my earliest memories of him.

In terms of dominance over a long period of time, only two men come close to matching Johns, Darren Lockyer and Johnathan Thurston.

Do not get me wrong, Cam Smith, Billy Slater and Greg Inglis are amazing players, and may well earn Immortal status, but right now if I was to vote, it would be for one, or both, of the Queensland superstars.

Thurston is surely about to add a fourth Daly M medal to his tally after producing perhaps his best season to date.

No man, not even the great Andrew Johns, achieved four player of the year awards in the modern era.

Of course individual awards are not the be all and end all. Darren Lockyer failed to capture a single Daly M during his incredible career yet I am putting him forward as a potential immortal.

Anyone can have one good season. Matt Orford and Preston Campbell have won Daly M medals yet neither will feature in future immortal talk.

Both were brilliant players, especially Campbell, but with the greatest of respect, neither dominated for five years.

I am a huge fan of Lockyer, and would not argue with his inclusion on the list at all, but for mine, Thurston is a first ballot immortal.

Thurston has dominated the game for as long as I can remember.

Although he only has one title to his name, an often forgotten effort from the bench in the 2004, Thurston had almost single handidly taken the North Queensland Cowboys from easy beats, to genuine title contenders.

At times he has had a brilliant supporting cast, none stronger than his current teammates, but Thurston has been the main catalyst for the success up north.

He has also been one of reasons Queensland have been able to dominate NSW over the past decade at Origin level.

At 32 years of age, he likely has another three seasons to play yet, which should take him well over the 300 NRL games mark and may very well see him earn 40+ Origin and test jerseys.

Numbers are not everything, but in Thurston’s case, they simply don’t lie.

Without looking into each of Thurston’s 265 NRL games, 33 Origins and 32 tests for the Kangaroos, I can remember multiple games where he played the starring role, while I honestly can’t remember more than the odd ‘off’ game.

Thurston has not just dominated over the past few years either, he led his Cowboys side to the 2015 grand final.

Once again, with all due respect to the Cowboys side, it was hardly a side brimming with world class superstars.

You take Thurston out of that side and there is no chance the Cowboys make the October decider.

If not for a few questionable refereeing decisions, and I hate to add fuel to the northern conspiracy, who knows how far Thurston would have taken his side?

I’d also argue that in this professional day and age that the quality of the game is better now than it was, making it harder to dominate.

Every side is expertly trained, their diets meticulously administered. GPS technology, multiple camera angles and slow motion cameras were not available in years gone by.

Every single aspect of Thurston’s game has been dissected and plans hatched to stop him, yet nothing has worked.

2015 has been his best season to date, and you’d be a braver man than I to bet against him producing something similar next season.

Simply put, Thurston is the most dominant, and consistent, performer I have seen since Andrew Johns retired.

When watching Johns I was obviously younger, and probably more easily impressed, so he may have even surpassed Johns in terms of talent.

We may very well see better players in the future. Technology and science develop year on year, and players get signed and trained at an earlier age as times goes on.

In terms of right here, right now, amongst a brilliant crop of elite players, one man stands head and shoulders above the rest.

The Cowboy, QLD and Kangaroo superstar has done it all, and in due time, this will include induction into the most elite group of all.