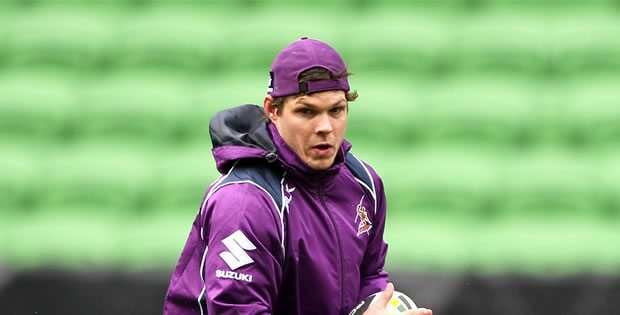 Promising playmaker Ben Hampton has agreed to terms with Melbourne Storm for a further two years.

The 22-year old made his first-grade debut against the Gold Coast Titans in Round 15, 2013. He made an instant impact, lining up at fullback and scoring two tries on debut.

After experiencing first-grade football last year, Hampton has made 11 appearances this season, partnering with Cooper Cronk or Ben Roberts in the halves.

Hampton was promoted to Storm’s full time NRL squad in 2012, having come through the Club’s successful development program.

Hailing from Mareeba, North Queensland, the emerging five-eighth has represented Queensland at U15, U16 and U18s level captaining the junior Maroons in the inaugural U20s State of Origin in 2012.

“We are really pleased Ben has re-committed to the Club,” Ponissi said.