Zero Tackle's stats-based team of the week for Round 2 is in, with the Sydney Roosters dominating after their big win over the Manly Sea Eagles on Friday evening.

Elsewhere, two halves under plenty of pressure have been included in the team, while the Rabbitohs' shock decision to bench Cameron Murray has seen him make the team.

Only three players - Dane Gagai, Payne Haas and Isaah Yeo have retained their spots from last week in an almost completely new-look team.

A reminder as always that this team is picked totally based on a stats-based equation, that players can not be picked out of position, and that bench players must have actually played on the bench for their teams during Round 2.

Here is the team.

Zero Tackle's Round 2 Team of the Week

1. James Tedesco (Roosters)
The Sydney Roosters fullback might have struggled to make an impact in Round 1, when the Roosters went down to the Knights in a shock loss, but he had no such problems on Friday evening.

He ran for 184 metres, made six tackle busts, had a try assist and was a general menace for the Sea Eagles defensive line.

2. Greg Marzhew (Titans)
Marzhew had a monster game against the Warriors on Saturday afternoon, and when it's considered he was the only player to make over 200 metres while also scoring a double, could well have been the difference between the two sides.

Almost a quarter of those were post contact metres, and his 11 tackle busts illustrate just how dangerous he was throughout the course of the contest.

3. Herbie Farnworth (Broncos)
Herbie Farnworth has been seemingly ready to go to the next level for some time, and put on one of the best performances of his career to date against the Bulldogs on Sunday, scoring a double and running for a staggering 266 metres.

A constant threat to the defence, he was one of the key differences between the sides in a tight battle. 4. Dane Gagai (Knights)
Gagai is two for two when it comes to excellent performances to qualify him for this team during his second stint at the Newcastle Knights, and unsurprisingly, his performances - along with the surprise form of Jake Clifford and Adam Clune - have led Newcastle to a two-win, zero-loss start to the season.

He scored a try and added an exceptional 160 metres to the stats sheet on Sunday, also having a line break and a try assist to his name.

5. Daniel Tupou (Roosters)
Tupou's height and style running the ball always make him a threat in attack, and he was near his best on Friday, making 163 metres and scoring a try while also tackling with 100 per cent efficiency.

A consistent performer at the worst of times, he is another Rooster who rebounded from Round 1.

6. Tom Dearden (Cowboys)
There are few halves in the competition who were under as much pressure as Dearden coming into the new year, with plenty calling for Scott Drinkwater's creativity to be selected ahead of the former Bronco.

Dearden's ball running and creativity was what won him his spot in this team though, making 120 metres and piling on two try assists on Saturday during the Cowboys' surprise rout of the struggling Raiders.

7. Nicho Hynes (Sharks)
There have been plenty of questions around Hynes and his ability to play in the halves, but they should have all been put to bed on Saturday night.

Hynes was superb from start to finish, kicking for more than 400 metres, while also running for over 100, setting up a try and kicking the winning conversion from out wide.

8. Siosiua Taukeiaho (Roosters)
Taukieaho was superb for the Roosters on Friday. A late elevation to the starting time for the oddly benched once again Jared Waerea-Hargreaves, he made a monstrous 238 metres from 23 carries, including 92 post-contact metres. 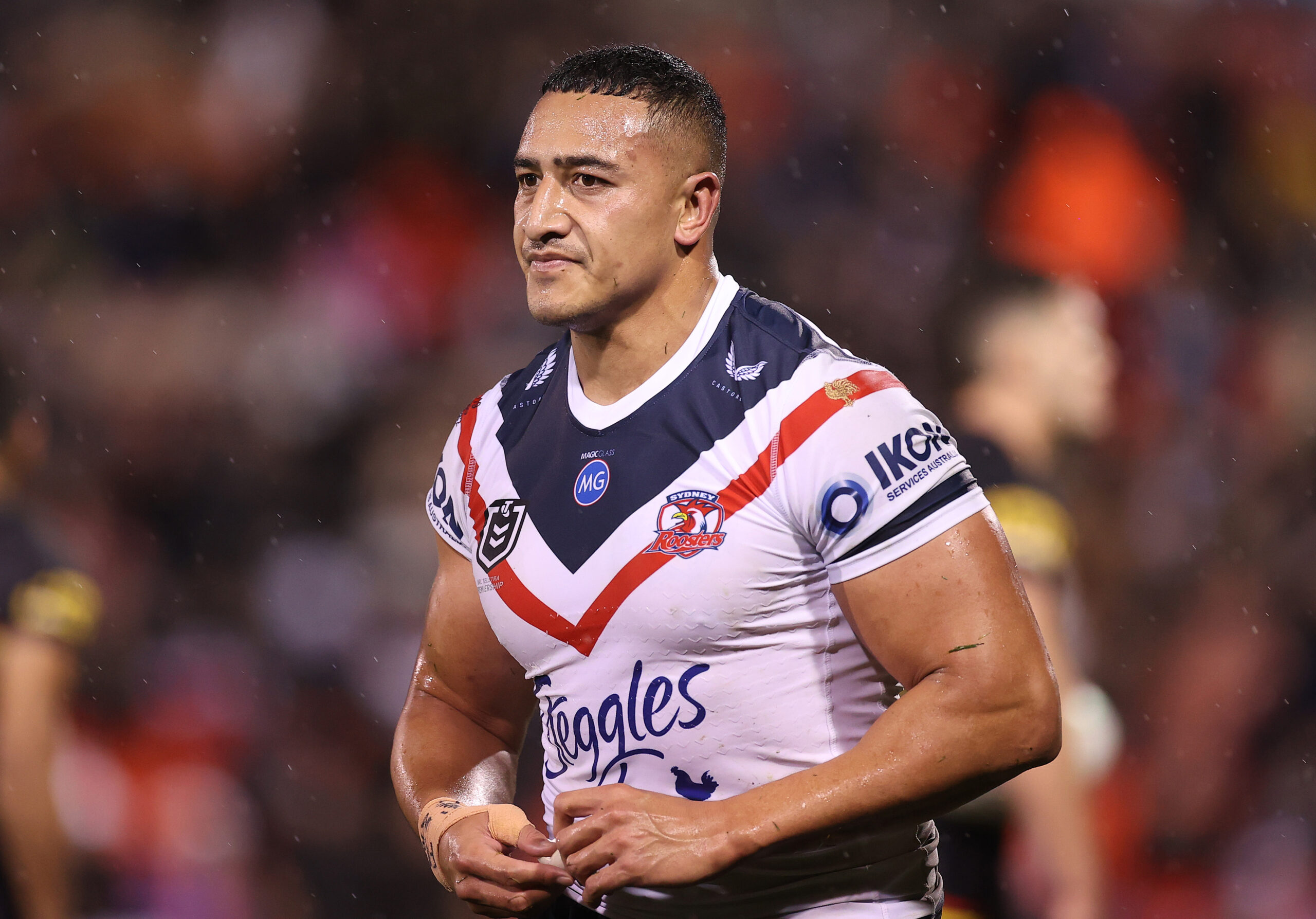 9. Harry Grant (Storm)
Brandon Smith might have been out, but it took all of one game for Harry Grant to stand up and confirm the club will still be in good hands moving into 2023 out of the dummy half position.

It may well have been Grant's best game in the NRL. It might seem an odd comment to make given he has already played State of Origin, but he didn't put a foot wrong, coming up with 145 metres to lead all Melbourne players, which also included a line break and a pair of try assists. South Sydney simply couldn't contain him.

10. Payne Haas (Broncos)
You get the feeling Payne Haas will feature in this team more than he won't this season, with this week's selection coming on the back of a 60-minute performance.

One of the hardest players to tackle in the competition, Haas made 159 metres with four tackle busts, while also adding an offload and 33 tackles.

11. Beau Fermor (Titans)
Beau Fermor is a player who has come on in leaps and bounds over the last 12 months, and he has continued that move this year with a spot in the starting side.

The second-rower who can also shift out and play in the centres has displaced former club captain Kevin Proctor from the starting side and showed why on Saturday with 173 metres and a try, as well as five tackle busts.

12. Tyson Frizell (Knights)
Frizell, a State of Origin calibre player, sometimes struggles to produce on a consistent basis at club level, but when he gets it right, there are few players more dangerous with the ball in hand.

He had 191 metres on Sunday, four tackle busts and a try, proving a general menace for the Tigers.

13. Isaah Yeo (Panthers)
If you were tasked with designing the ultimate NRL player, and one of the criteria was consistency, you would simply have to take Yeo.

The Penrith lock never puts a foot wrong and had one of his better performances on Friday against the Dragons, running for 151 metres and also breaking four tackles, while he made 43 tackles of his own, impressively, without a single miss. 14. Nat Butcher (Roosters)
Nat Butcher will push for a starting spot at some point this year, and came up with another good performance on Friday, running for 134 metres, with a pair of tries, a pair of line breaks and a pair of tackle busts. He also defended excellently and with consistency.

15. Spencer Leniu (Panthers)
Leniu was originally supposed to start in the absence of Moses Leota before being a last-minute switch back to the interchange bench for the clash with the Red V.

It didn't slow down the young prop though as he came up with a try, two tackle busts and a line break from his 74 metres, while he also didn't miss a single tackle in the middle third.

16. Cameron Murray (Rabbitohs)
It was a very odd demotion to the bench for Murray, who came on early and was never replaced afterwards. He ran for 134 metres and was solid as a rock in defence, as he always tends to be. His 47 tackles and general work rate, in many ways, helped to keep South Sydney in a game they should have been - and looked like being at multiple points - blown out of.

17. Siosifa Talakai (Sharks)
Talakai is the final player to scrape onto the bench, and with good reasons. He was at his barnstorming best during the clash against Parramatta, making 161 metres which went with a line break and three tackle busts.