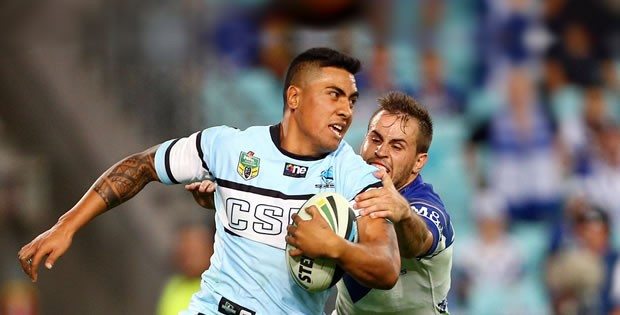 In a major boost for the Sharks ahead of their game with the Newcastle Knights on Sunday, young outside back Sosaia Feki has extended his contract with the club through until the end of the 2017 season.

Promoted to the NRL squad midway through last season, the New Zealand born Feki has since made the left wing his own with a strong of impressive performances.

Ironically he debuted against Newcastle last year, before going on to play the final 19 games in 2013, whilethis year has played 12 of the 15 matches so far, missing just three games with a leg injury.

Current Sharks NRL coach James Shepherd has witnessed the improvement in Feki and explains his contact extension to be a just reward for his hard work and perseverance.

“Sosaia has definitely developed into a quality NRL player,” Shepherd began. “His confidence is building, he makes a major contribution every week and has earned the respect of his teammates. They love playing alongside him.”