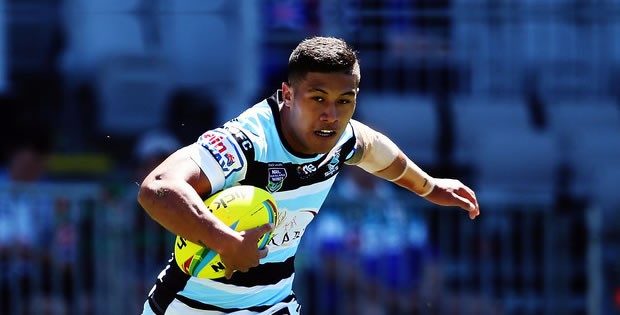 He made an impression earlier in the season as a member of the Sharks Auckland Nines squad and now Fa’amanu Brown has a chance to display his talents on the big stage once again after being chosen to make his NRL debut in the match against the Dragons on Saturday night.

After strong showings in the NYC Brown gets his opportunity in the top grade, coincidently against a team which features his boyhood idol Benji Marshall.

However while his debut match is sure to be an exciting occasion, making the week even more significant was the fact that today Brown signed a new deal with the Cronulla club, one that will see him remain at the Sharks through until the end of the 2017 season.

Already committed to the Sharks for 2015, the new contract extends to the 2016 and 2017 seasons, with Brown on Saturday getting his first chance to work towards cementing a regular spot in the Sharks NRL team.

From the Hornby Panthers in Christchurch and of Samoan heritage, Brown arrived at the Sharks in 2012 in the Sharks SG Ball squad, was quickly elevated into the NYC team later that year and has since showed off his skills at an under 20’s level in a variety of positions.

Still just 19 years of age, Brown, primarily a half or five eighth but just as comfortable in the centres or at hooker, stands 188cm tall and weighs in at a around 90kgs.